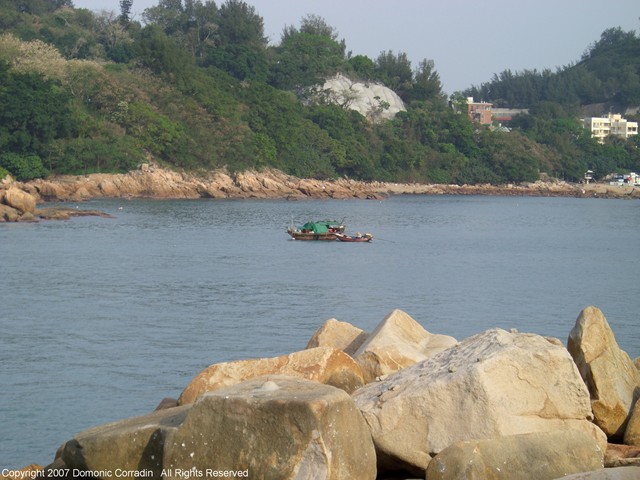 I have left Geneva for London and on to Hong Kong. Once again the TSA’s at Geneva Airport push me right through and give me the rock star entrance.

The British Airways (www.BA.com) flight to London was cushy and really comfy. The crew was really cool and helpful. I was on an Airbus A-320 which worked out well using a straight back to get me on and off the plane. The first class lounge at London Heathrow for American Airlines rocks! I grabbed some food …and boy does a 20 minute massage help your flight and attitude! There is a whole lot of retail shopping in London Heathrow Airport (www.HeathrowAirport.com). It is like a shopping mall there and with a 5 hour layover I figured I would wander around and see what’s up. Most of the stores are high end shops like Omega watches and Dolce and Gabanna. It was all out of my price range, but fun to window shop anyway.

I have now officially been spoiled beyond belief! I have ridden on a Boeing 747-400 in 1st class. From London to Hong Kong straight is about 12 hours, but it was over night, so you don’t lose any daylight in transit. The first class cabin is great. I did have to use a straight back to get in this time. Even my skinny chair couldn’t quite fit down the aisles. The staff on the flight was awesome. I felt like a king with 3 flight attendants on rotation for the first class cabin and I was the only one awake. And, an English tea with milk and biscuits first thing in the morning rocks! Not to mention a bit of Mudvayne in the MP3 player to charge you right up.

I checked into the Conrad Hotel (http://conradhotels1.hilton.com/en/ch/home.do) with a room on the top floor -- all the way up to 61 I go. Nothing but rock star, so far. The first night I am there I hit a great little Italian café called Solo Mio and was treated to some killer pasta. Then on to Wild Fire, down the street, for some tasty mojitos. On my way down one of the steepest sidewalks I think have ever had to traverse I met a group of people that invited me into a pub for a few drinks, and who was I to refuse. After a couple drinks at the Peak Bar we moved the party to a club called Dragon I, which was great. An elevator trip up from the lower street level and we rocked out. I even got to hang out with one of the DJs of the club, this cool chick GeGe. Most everyone wanted to call it a night but a few of us die hards continued on to Fo Lar, but the bouncer and the manager wouldn’t let me in. Dig this. After 15 minutes arguing with the bouncer AND the manager, getting 3 different reasons for not letting me in, the bottom line was they didn’t want me in there because I was in the chair. Not to mention, neither one of them would even look me in the eyes. No worries though, we’ve got a lot of other places we can go, so off we head. We ended up at this all hours nightclub called From Dusk ‘Til Dawn where we danced to a bunch of American music covers by a pretty good band. We decided we had enough of that place and headed to the next. Little did we know it was already daylight. Oh well, we kept on to the next place called The Bridge. Now the night is really starting to wind down and only the true rock stars and insomniacs are out still. I left the club around 8 in the morning and slept for a whole day to recover from my jet lag and the night of drinks and dancing.

The next day I headed off to Stanley Market on the other side of the island and wandered though the touristy shops and stumbled upon an Irish pub called the Smuggler’s Inn. I inhaled a fantastic plate of fish and chips and washed it all down with a nice, cold Guinness. Who would have thought I would find great Irish food and a true Irish pour of Guinness in Hong Kong of all places. Stanley Market was actually really accessible with ramps everywhere and lots of flat ground. That night I took a cab up to the Peak and rode down the Peak Tram down to the city again. The Peak tram takes you back and forth from the highest peak on the island. The staff at the tram were a bit overly-helpful, but at least they were there to help. That seems to be the general trend of the whole island, but I am not complaining.

After the awesome ride on the tram, I took one of the ferry boats across the channel to mainland Kowloon. The stations on both sides have plenty of ramps and lifts to get you anywhere you want go. The ramps are a bit of a tough climb though, so be careful. On the mainland side of Hong Kong I had dinner at a restaurant called Felix. This place was really cool and very low key with great food. On the way back to the hotel my buddy Jim and I stopped at an interesting little club called Club Superstar and had a few drinks, becoming a private party all to ourselves and the girls working the bar.

After another long night, I took another day of rest. Hong Kong is turning out to be a day on/ day off place.

The next day, I had lunch at the hotel with one of the ladies I had met one of the previous nights before, and then went for a tour around the city with another lady I had met. I had another bite to eat at a Chinese restaurant with all the people that work at the Hong Kong Youth Arts Foundation (www.HKYAF.com). Then I got a chance to see the inner workings of the foundation and meet all the organizers there. This was a really cool foundation helping kids learn art and stoke their artistic sides.

The next day I just stayed in the hotel getting work done and following my scheduled every other day rest. I did get a chance to go to the Foreign Correspondence Club (www.FCCHK.org) for dinner with Jim and some of his coworkers. The place had a nice side entrance to the restaurant with only one step and the usual overly helpful staff. Good meals had by all with a variety of different foods.

The last day I spent getting my bags packed up again and preparing for my 9 hour flight to Melbourne, Australia. The flight leaves out of Hong Kong Airport (www.HongKongAirport.com) in the evening and gets into Melbourne Airport at the crack of dawn. Gotta love overnight flights! Cathay Pacific (www.CathayPacific.com) treated me like a king once again in first class. The flight was almost diverted to Sydney due to the thick layer of fog sitting over the runways, but, luckily we got to land at our true destination. Time to light Melbourne on fire! Stay tuned for the next stage of the trip..