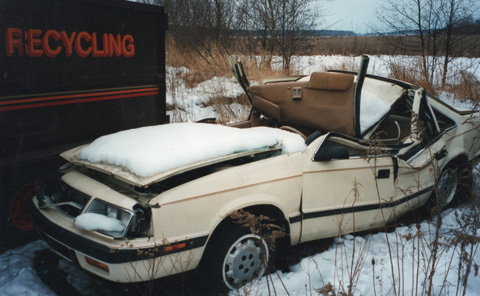 I was born in a small town named Whitehall in western Michigan along the coastline of Lake Michigan. I was raised on a small "hobby" farm a few miles outside of town. We had the typical animals -- horses, chickens, goats, guinea hens, dogs and cats. So, I was well versed in manual labor as a child.. Also, I had been in athletics since I could pretty much hold a bat and glove. I started out with baseball, playing little league ball for 6 years. Then I moved on to many different sports at my school in junior high. I wrestled, ran track, played basketball and then got into soccer.

At the beginning of my freshman year, a friend of mine invited me to join the soccer team that his father was going to be coaching. I figured I would give it a shot. I was always up to trying something new. Little did I know this would become an absolute passion! I began training and playing the summer before my freshman year for the fall school season and loved it. Our school only had enough players for a single co-ed varsity team, but it was a start. I played 3 separate seasons in my first year, from fall varsity to an indoor community team, then spring league with the county of Muskegon. I was hooked! For the fall of my sophomore year in high school I had done my summer training before the season started, and as the season went underway I was kept on the varsity team now that we had enough players for 2 co-ed teams (varsity and junior varsity). I was now the starting varsity goalie for my high school.

After a great season with my team we finished up the year and I went back into training mode, working out at the school gym 4-5 days a week. I was on my way to a college team somewhere and eventually a spot on one of the European leagues in my future. In November, I celebrated my 16th birthday and went down to get my driver's license. Three weeks later, on December 9th, 1994, after a training session at the school Ihopped in my car and headed home. I hadn't even changed my clothes, just put my varsity jacket on because I only had a 5 mile drive home, but I never made it home that day.

Around a mile from home my car spun out on an icy curve where a dusting of snow had covered the road, hiding the glare ice laying across the road. With my lack of experience driving in adverse conditions I over-corrected the steering and lost all control of my car. It spun around backwards, crossing into the oncoming lane, barely missing a car coming at me from that direction. My car slammed into the snow buildup along the side of the road from the previous plow passes. The momentum built up tipped my car onto its side and vaults me into a tree approximately 16 feet from the road. The roof of my car collides with the tree along the driver and passenger seats, crushing the roof down against my back. The gear shift lever that was in the center console stopped my body from going any further down, pressing into my sternum. The car continues its flight, spinning on the tree and landing on its wheels, now in a cul-de-sac of trees.

Fortunately, the car that I almost hit stopped and another man who happened to be across the road getting ready to head off into the woods to hunt came running to my aid. They called the paramedics right away and the ambulance and fire truck arrived in only a few minutes. As firefighters were surveying the situation and battling with the frozen hydraulics of the Hurst tool(jaws of life), my father drives up on the accident on his way home from a job site. The only recognizable feature of my car was a drawing that I had made and taped to one of the rear windows in my car. Coincidentally, it was one of the only windows left intact after the impact.

Once my father realized it was my car, he stopped and offered his assistance to the paramedics. He explained to them that he was a contractor and had a good assortment of tools on board in the back of his truck. The paramedics ended up cutting the roof supports around the windshield and peeling it back like a tin can. They then carefully pulled me out over the hood of the car and strapped me to a long board in preparation for transport to the emergency room at Hackley Hospital in Muskegon, Michigan.

I was admitted into Hackley Hospital after the x-rays showed a compression fracture of 2 of my vertebrae at the Thoracic 5 and 6(between my shoulder blades) level. After 2 days, I was transferred to Blodgett Memorial Hospital in Grand Rapids, Michigan about 45 minutes from home. Hackley Hospital wasn’t equipped at the time to repair the damage to my spine and spinal cord. I underwent a 5 hour surgery to reconstruct the bones in my back with a bone graft taken from my hip and add in a pair of stainless steel rods to stabilize my spine during the healing process. Even with fantastic work the surgeon had done to repair the damage to my bones, the damage to my spinal cord would be permanent. A few more additional days in the Intensive Care Unit at Blodgett Memorial Hospital and I was transported to Mary Free Bed Rehabilitation Hospital there in Grand Rapids, as well. Here I went through a 6 week inpatient rehabilitation program.

I was released from Mary Free Bed on a Thursday afternoon and Friday morning went back to school. While I was in the hospital, my father was able to get some of the work done in remodeling the house to make it accessible and finished shortly after I made it home. I was fortunate my school was very accessible to begin with, so getting back into the groove at school came quite easily. I was given my homework while in the hospital and a portion of my hospital stay was during the Holidays, so everyone was on Christmas Break anyway. I was so happy that my friends and family received me back home in such a positive way. Some were unsure of how I was going to look or act when I came back from the hospital. I used to tell the kids that would come see me in the hospital that I was still the same person I was before, just now I am shorter and on wheels. They would giggle and relay the message that all was going to be fine.

Over the next 2 years, I spent my time getting back into athletics of all types, finishing up my high school career and just trying to regain a "normal" life -- well normal for me. I got myself into racing wheelchairs, competing in the Riverbank Run 25K in Grand Rapids and a few other races over a span of 2 years. Then I got bitten by the basketball bug again, getting into wheelchair basketball my senior year. I played a championship season with the Grand Rapids Junior Pacers before leaving to go to Arizona for college. It was so gratifying to be able to get back into competition and be active again. I cannot express how wonderful it was for my own mental and physical well being. Not to mention, everyone around me seeing that I was happy and doing well.