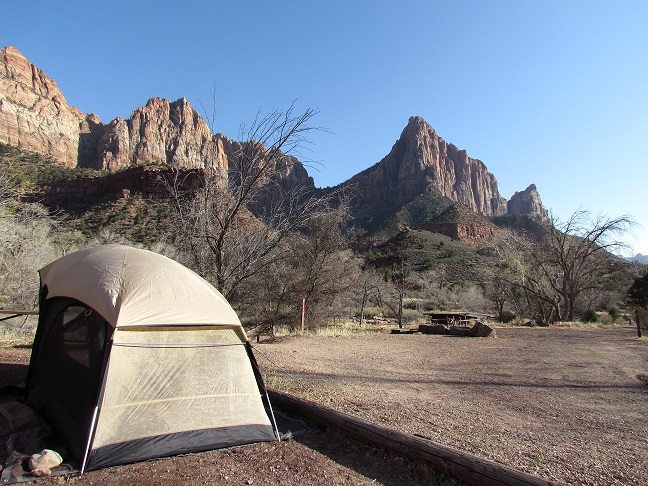 Bright and early Thursday morning my girlfriend and I packed up our gear in the trusty Tundra and headed off on a grand adventure. With all of our camping gear, ample amounts of cold weather clothing (just in case), and our bikes, we headed off to Utah. More specifically, to Zion National Park to camp for a couple nights, play in the park, and race in the Zion Half Marathon put on by Vacation Races (www.VacationRaces.com).

The drive from home is about 7 hours, more if you make pit stops, less if you drive like a man/woman possessed. We hit a bit of traffic driving through the always entertaining city of Las Vegas. Then smooth sailing right into Springdale, UT with some gorgeous views along the way as we pass through 4 states. Driving “through” Arizona is kind of cheating as we just drive across a sliver in the corner of the state, but hey, we still left tire tracks in that state, too.

By the time we had arrived at the entrance to the park the ranger station had already closed, so we made our way in to the South Campground and found all 3 of the handicap camp sites available. We picked the one with the best view and quickly got the tent and gear unloaded as the sun would be setting fast. The canyon was already shadowed from the high walls on all sides, so it was already a bit dark even at 6:00pm. We beat full darkness by only moments as we were putting the finished touches on the tent by headlamp and lantern.

After a quick bite, we decided to make it an early night to get up early and make a full day of it in the park. We layered up in all we could without feeling too much like the Michelin Man and tried to get some sleep as the night got colder and colder, reaching into the low 40’s. A definite learning experience for the both of us camping in cold weather, but we will be MUCH more prepared for the next time. The biggest lesson being gear, the right gear makes all the difference!

The next morning we’re up early and dreading getting up, exposing ourselves to the still chilly morning. Kind of like not wanting to open the shower curtain after a nice hot shower, but we brave it anyway. The sun is shining and we are in an amazing place. First things first, we have to head over to the race expo and get sorted with my registration and all that mess. It was such a pleasure to finally meet Salem, the race creator, face to face and chat with him for a bit while I got all my paperwork filled out. Then we wandered around to some of the booths that peaked our interest at the expo. Fitting to the whole theme of the race, the expo was actually outside in the courtyard of the Giant Screen Theater.

Of course, I stopped and chatted for a while with one of the vendors there. Andrew at Ledge Sports/Jetflow and I talked in length and I look forward to continuing our conversation along with maybe even getting a chance to ride with him and his crew in Salt Lake City or Whistler. Both locales sound killer for some time to get dirty. If you want to check out any of the top notch gear that Ledge Sports produces check out www.LedgeSports.com and www.Jetflow.com. I know I will be getting more of their gear VERY soon!

Once we made our way through all the booths we wanted to check out, we hopped back on the path right back to our camp site and off-loaded the bikes from the truck. It was time to see just what sort of trouble I was in for on these roads and if the elevation was going to play a part in the coming race. We were at around 4000 ft., so not too high, but still higher than normal for us.

We set off down the road, riding deeper into the park, which just so happened to be up hill. For some reason, whether it is the landscape around us or some strange planetary anomaly, it felt as though I was cranking way too hard to keep speed on flats and down hills. Only after a couple miles I opted to call it and head back to camp. On the way back I was now cranking way easier and realizing that all the flats and so-called down hills where in fact still climbing uphill. No wonder I was going so slow and working so hard to do so. And here I just thought I was really out of shape.

On arrival back at camp we packed the bikes back in for the night and decided to venture into Springdale and check out some of the fine dining establishments near the park. The winner for the dinner tonight was Wildcat Willies (www.WildcatWillies.com), one of the sponsored venues for the race, giving all race participants a healthy discount on their meals. And what a great meal it was. My giant sirloin burger and Terri’s meatloaf were excellent and a nice Shock Top beer to wash it down. Hey, I need all the calories and carbs I can get for the morning’s race.

After another cold, short sleep, we are up WAY before the sun. 4:45am is when the blasted alarms start going off. Layering up again with the intention of stripping down to a final riding set of cloths and trying to stay warm at the same time is quite the losing battle. We did the best we could and hopped in the truck on to head to the starting line.

We found the starting area under some pretty serious flood lights and a small tent with a couple propane space heaters in it and a group of 30 or more people tightly crammed together trying to stay warm as the wind whipped through, blowing the side skirts of the tent everywhere. We opted to stay in the truck for just a bit longer before we really do have to get out and start getting ready. No need to get out of the warmth just yet..

Terri and I finally open the doors and start to unload the bikes and gear and make our way to the start line. Laughing, yet questioning, “Why are we here again?” we make our way over to the starting gate and shortly thereafter we are off. Cranking is a bit difficult in the multitude of layers, and my fingers are so numb that I can’t feel the shifters, even through my gloves.

Mile after mile passes as the sun finally begins to show its face. The sunrise over the cliffs is well worth the cold. Riding along the road there are flagmen controlling traffic that is down to one lane only, and yet people are still driving down the blocked lanes. Hmmm.. I wonder if they are that dense to not realize they are not supposed to drive there or are they just that self-absorbed that they don’t care. At any rate, the guys at UDOT did a great job of blocking the roads for us. We made it to the finish line unharmed, and partially thawed out.

After the race, we promptly headed into the cafe for a hot cup of heaven to try and warm up a bit and decided to gorge ourselves on pancakes and waffles. I don’t know what came over us. It certainly wasn’t just the 13 miles we just rode in the freezing cold. Then, once sufficiently warm we ventured back outside for the awards ceremony before hitching a ride with one of the organizers back to the start line to pick up our truck.

By the time we had made it back to the starting area, pretty much everything was picked up and cleared out. Very impressive by all the volunteers and various other workers. I have to say this was one of the most well-organized races I have done to date, and this was their first ever. I look forward to being many of the other Vacation Races in the coming months. And, I have to say the “cupless race” was an awesome feature. It had the option to carry your own hydration or get a loaner hydration pack, as they would not have any water stations along the race route in an effort to cut down the trash. Very cool, guys!

Once we got the truck and got back to the camp site, we quickly tore down the tent and all the fixin’s, packed up and headed for home-- the long, sad drive home, leaving such a wonderful place. Yet, we made a promise to each other that we would come back very soon. I mean, it is only a 7 hour drive, free entry to the park and half price camping (thanks to my lovely Golden Access Pass from the National Park Service). And there is heaps more to do and explore right there in the park, let alone all of the fun little towns around the area. Not to mention a little gem of a spot called Hurricane (pronounced “HER-a-cun”) filled with old cars and trucks, ripe for the picking not too far away..

Make sure you check out the Vacation Races site (www.VacationRaces.com) and get involved. It is a great series with races popping up all over the country, and all located near the national parks. And, as always if you would like any more information or to send me a comment, please feel free to email me at This email address is being protected from spambots. You need JavaScript enabled to view it..