And So It Begins..

Old Blue is a 1972 Chevrolet C-10 1/2-ton long bed pickup. She’s got a 250 c.i. inline 6 cylinder with a 3-on-the-tree manual transmission. No frills at all. No power steering, power brakes, a/c or even side moldings on the body. Coincidentally, she was built the same year and at the same factory as Adrenalin Fix.

On June 26th of 2018 we bought Old Blue from my boss at the time for a good deal. She was a little humble, but good bones, as they say. Finally, on July 13th we brought her home to start working.

The first thing we did was to clean out all the old parts, garbage and dirt from inside the cab and the bed. The old girl had been sitting for some time and apparently used for storage. It looked as though one of the previous owners was collecting parts to upgrade some of the things like power steering and brakes. The original bench seat was even still in the bed. I realized it was the original seat as I found the factory build list in the backrest and carefully removed it to try and save. I love finding things like that! It is always fun to learn the story and history behind a truck. 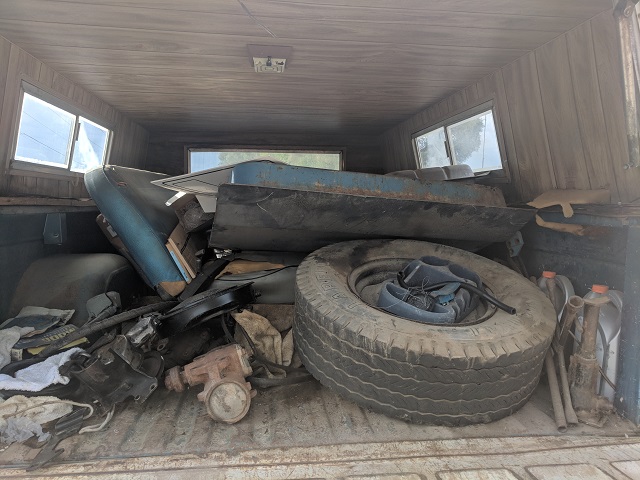 Once all the stuff was out of the truck, it was time to clean the dust and grime out. First, I took the bench seat and in-cab gas tank out. Then I got the old rotten rubber floor mat out. Man, this thing has been neglected! Doesn’t anyone take care of their toys?

So far, the rust repair is pretty good. The kick panels and door sills are a bit like Swiss cheese, but that is a common spot and good ol’ LMC Truck has patch panels raring to go for me.

While the tank was out, I made sure to wash it out really well. There was a ton of rust and dirt inside, and old gas build up. I cleaned up the old hard fuel lines as they were still in good shape and no need to buy new ones. I was able to clean up most of the old hose clamps and even found all the soft line pieces I needed.

I also gave the old seatbelts a good cleaning and got the retractors in good working order. I was surprised at how good they came out.

The tailgate was buckled pretty good in the middle, so I robbed the new-ish one off our other truck Adrenalin Fix and just cleaned up and reused the old hinges and mounting hardware. Gonna save the original one for a project later on.

One day, I went to the bone yard with some buddies to see what we could find and low and behold I was able to scavenge a brake pedal assembly to get rid of the clutch and brake unit that’s in there now. Just a little scrubbing of some surface rust and she is good as new and ready to go in.

I also picked up a couple different transmission options and an automatic steering column from a friend. The column isn’t a tilt one, but it will do for now. We now have the choice of rebuilding and installing a Turbo 350 or a 700r4.

I even scored a fuel-injected small block 350 from our landlord to drop in. It will fit nicely in place of that tractor engine from the factory.

Today I re-installed the gas tank and the hard lines. Everything is clean and fresh now. Even the new sending unit I found in the mess of parts that came with the truck. I also found a brand spankin’ new filler neck grommet for the side of the cab. The old one was totally rotten and would have leaked something fierce. 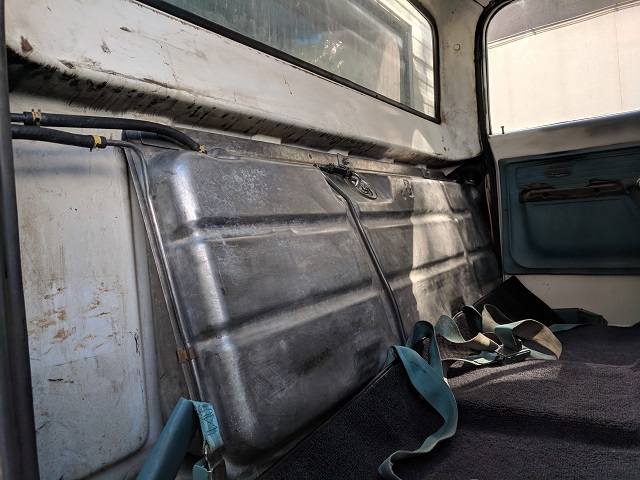 Today that wild hair got in my butt again and I decided it was high time to get rid of that old, ugly and rotten topper shell on the bed. Something I probably should have waited for help in doing, but impatience wins, once again. I unbolted all the odd bolts holding the shell on and proceeded to slide it off the back bit by bit. About half way, it tipped to the ground pretty much like I planned. I just didn’t exactly plan to be trapped inside it. Luckily, there was enough room to slide my chair out on its own and then myself after. A quick hop down to the ground and back up and we are at it again. 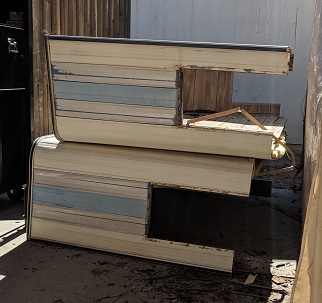 I grabbed the trusty saws-all and made a couple cuts up the middle and it folded in half like an ugly blue and white taco. Just like I planned it… Good thing the city comes soon for their big item trash pickup day. I drug each half out to the curb with much satisfaction and sat back to look at the progress. It looks SO much different without the topper!

Over the last couple days, I decided to dig into the brakes, suspension and wheels. I was curious to see what sort of shape everything was in. To my delight the brakes are in good mechanical shape, barring some surface rust that will just take a wire wheel and some elbow grease to cure.

The front suspension and steering are going to take some serious time. I was able to clean off some of the caked-on grease, but there is a long road ahead on that one. There was so much hardened excess grease over the ball joints, you couldn’t even tell they were there. I chipped away at it with a wire wheel on my drill and a putty knife, but I am going to find an easier way for the rest of it. 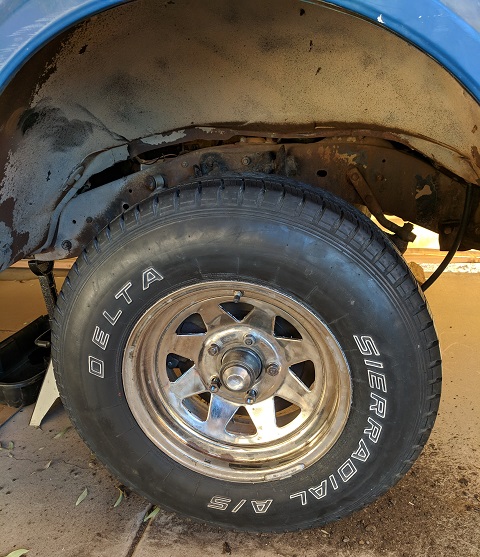 I also took the opportunity with both the passenger side wheels off the truck to see if I could clean them up a bit. I dug out the trusty paint stripper and got rid of the already half-gone, white paint. Underneath the degrading paint I found that the wheels had actually been polished before the paint, so they cleaned up quite well. And, I must say they look a whole lot better.

Today’s list includes: getting the drive shaft out and all the shift and clutch linkage disconnected from the transmission. Also, getting the steering column disconnected. I even had a bit of time to do an oil and filter change on that old tractor engine put of a power plant. The filter was a bit stubborn, but a punch driven through the side wall motivated it just right. Once I got all the black, putrid oil out, I replaced it with fresh, new lube and a clean filter.

The drive shaft was rather smooth coming out, as was the shift and clutch linkage. It was covered in grease and dirt but came loose very easily. The steering shaft was a bit of a bear, but stubbornness and a big hammer prevails. I cleaned up the splines on the steering box and even installed a new rag joint.

Next, the automatic column and brake pedal assembly get to go in. Another day…