I figured that I owed everyone a good, DETAILED update on the truck build, as my last couple were short and sweet to say the least. I have been working rather diligently over the past few month on getting this truck on the road. I have stripped my time and intentions down to just getting the truck running and driveable. I have decided that the “pretty” can wait until a later time. I just want to be able to drive my truck already, and for it to be able to do the job it yearns to do, hauling gear to all the good little boys and girls. 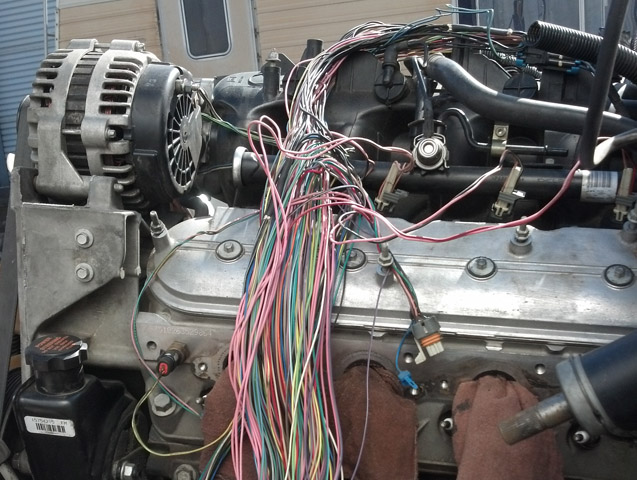 The wiring harness has been a fun experience – I hope you can all hear the sarcasm oozing from my words. I have sorted out each sensor and its specific lines into organized sets ready to be plugged back into the engine and transmission. I still have to take out the wiring and sensors that aren't going to be used, such as: the EGR valve and some of the oxygen sensors. And I have to add in the wiring from the additions I am making, like: power windows, power door locks, dually-style cab lights, and much more. Also, the computer is heading out to Custom Built Motors down in Rancho Cucamonga, CA in the next week or so to be reprogrammed. 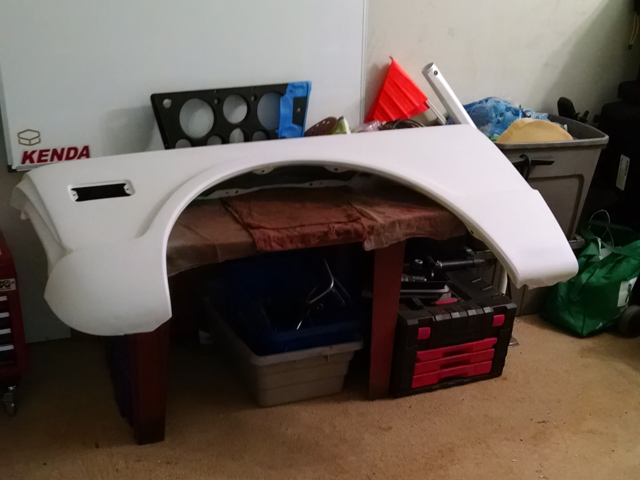 I have finished filling the old molding and badge holes on the front fenders, fixed a couple rust spots, and finished the initial round of bodywork. I even sprayed a few coats of white primer on them to seal them up from rusting and to try and bring the whole truck to one color over the whole body. Well, at least it is all white, even if it is a couple different shades of.. white.

The awesome bench seat that my man Edward Jimenez helped me out big time on is placed in the cab – boy was that a chore on my own! That bugger is seriously heavy. I think I need to find some lighter bucket seats down the road sometime. The brackets to mount the seat aren't in yet, but at least the seat is in the cab on some wood blocks for positioning.

With the seat, I have disassembled, cleaned and reassembled the dash, including: all the a/c and heater ducting, glove box, steering column (which received a whole new wiring harness from LMC Truck), and the new dash pad. I am waiting to install the gauge bezel for when I get the new gauges and all that mess sorted out. The sun visors are in and the door panels are waiting for a bit of body filler to cover the old window crank holes and a fresh coat of paint. 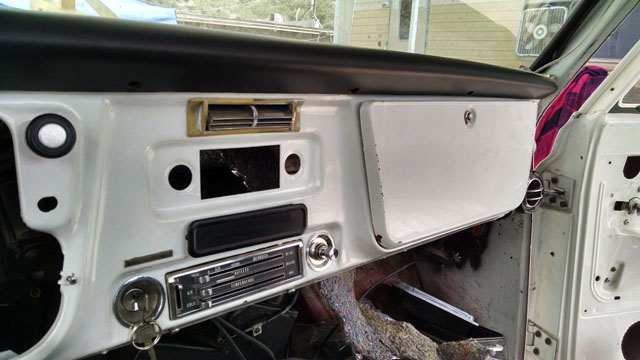 I have removed all of the rest of the original wiring from the cab and front end and am having a GREAT time – sarcasm noted? -- matching old and new wiring together along with fixing 40 years of idiots splicing wires that should have been electrocuted long ago. The surprising fact of this whole wiring adventure is that there are less wires to run the entire interior, headlights, and taillights, than there are to run just the engine and transmission. Hmmmm..

The engine is finally on the correct engine mounts and all bolted up. The tubular transmission cross member is in, both thanks to the folks at Classic Performance Products (CPP). We had a bit of a challenge and some trial and error with the engine adapter plates, but in the end we sorted out exactly what was needed and it fits beautifully. I really gotta give it to CPP, their conversion kit for the LS engine into these old Chevys are really well done.

I had quite the experience just the other day trying to remove the exhaust that was still hanging in the frame rails. With the installation of the engine and bolting on the sexy, little shorty headers, I was now aware that the exhaust tubing wasn't going to work. Unbolting it from the rusted hangers was the easy part. Trying to get it out from under the truck was another story. The LONG 3’ diameter steel tubing and GIANT mufflers weighed in at a small elephant and each side was fully welded together, having to come out as such. Did I mention that the tubing after the mufflers was bent up and over the rear axle with a 2-foot section turned out towards each bed side? That made for a Tetris challenge, for sure. I ended up having to unbolt the rear shocks and move them out of the way, after fighting with it laying on my back on the concrete for 20 minutes. Finally, SUCCESS! This would have been quite a bit easier with a lift. Next time.. 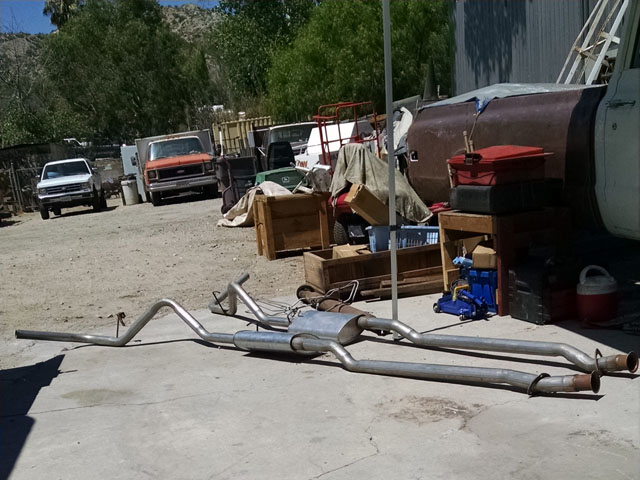 I made my first trip down to the wonderland called Pick-A-Part in search of, well, whatever I could find, but I did have a list of bolts and such that I was looking for in particular. My man Jeff and I wandered around for hours among the “candy store” and, even if I didn't get everything on the list, we had a good time and a good deal on what we did get. I must return to this place of awesomeness very soon!

Some of the finds that I made at the Pick-A-Part were most of the tailgate mounting hardware. I spent the time cleaning the layers of old paint off and bolted everything up. Only a few more bits and I can hang the brand new tailgate on – completing the rear part of the body panels.

So, there it is guys and gals.. You are now up.. to.. date.. on the project otherwise known as Adrenalin Fix. I hope you are all keeping an eye on the progress either on Facebook

as I try and post pictures and such. This project has been an incredible one and I am doing my best to tick things off the to do list, even if only a little at a time.

As always, your questions, comments and the like are welcome. Feel free to reach out to me, if you like.