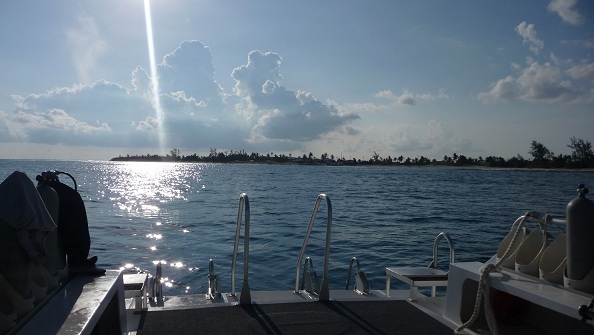 After a 7-day crash course in SCUBA diving at Adventure Scuba in Plano, TX under the excellent instruction of dive master and instructor Rodney Marshall, I was certified and ready to do my first big water dives. I made my way through the tests, the pool dives, and the lake dives. I am now Handicap SCUBA Association (HSA) Class A Certified!

Up at the crack of dawn to make an early morning flight from Dallas, where I was staying with a friend, we flew to Houston where we met up with the rest of the Dive Pirates group and boarded our second plane to Grand Cayman. Then after a short layover there, the whole crew hopped on yet another plane to Cayman Brac, the smallest of the islands.

Upon landing at the Cayman Brac airport I expressed my concern in just how well it was going to work in getting 24 crips off a plane. With 3 isle chairs and 6 knowledgeable ground crew members. we were off loaded quickly and easily. I must say, this is the best I have ever seen getting one person off a plane and down to the tarmac, let alone 20-some.

Once off the plane we made our way to the curb after grabbing our gear from baggage claim where we were greeted by a flatbed truck and 2 vans to take us to our resort. The Brac Reef Beach Resort is where we were intending to stay, but Hurricane Paloma had leveled the island only 7 months prior taking most of the resort with it. We arrived to some of the buildings still standing, some freshly rebuilt and some still in a state of construction, including all of the rooms.

Never fear, they have it under control! It was organized that we would be sleeping at the Alexander Hotel and using the rest of the Brac Reef Beach Resort and Reef Divers II for everything else. Our meals were all under killer canopies at the resort as the only people that were there at the time were our own group. Catered by the resort’s restaurant and staffed by the normal staff completely volunteering their time, it was an experience unmatched by even the best restaurants. The best food brought out to fill our bellies by the friendliest people only to stuff ourselves to the gills before heading to the Alexander to drop our bags and catch some sleep after the long day of travel.

The Alexander Hotel, which had done a fair bit of remodeling after the hurricane, had finished up just in time to be open for our group to arrive. Their rooms were extremely accessible and backed by a great staff willing to help with whatever they could. First thing the next morning we were up and charged to go diving. Greeted at the door by some familiar faces we were shuttled back to Brac Reef to get signed in and be treated to a wonderful breakfast before we were divided onto one of four boats for our first two dives of the day -- of the week.

After two dives we went back to the Brac Reef to be lavished once again with great food and wonderful people before heading back out for 2 more dives. With the best dive masters giving us very informative briefings and hitting the water with them as well, we were shown some of the most beautiful sights the human eye could behold. The water was as warm as bathwater and visibility as far as your eyes could take you.

We did our afternoon dives then headed back to the resort for dinner and then a bit of relaxing before collapsing in our beds in sheer exhaustion -- only to do it all over again the next day. I could totally get used to this! I am in absolute heaven.

Our first dives were on a Sunday. Monday was the same schedule, but Tuesday opened up a choice of a night dive, which I took without even a second thought. Night dives are a whole different world. It felt almost like being in a deep sea diving movie, such a cool experience! Swimming around, you can only see as far as your light is shining so it is a bit unnerving, but the water life you see is totally different.

Wednesday was back to the normal 4 dives and then “movie night” where we watched Cut Throat Island with Gina Davis -- a good pirate-themed film to keep the spirits high. Argh! Then off to crash again at the Alexander. Also, gives me a chance to go to the shopping plaza next door to the hotel with a laundry mat. Only $10 covered a whole bag of laundry washed, dried and folded by the wonderful lady that worked there.

Thursday went just as the days prior. Then back to Brac Reef for dinner and karaoke where I was coerced into singing a little tune by George Thoroughgood – Bad to the Bone, you may have heard it before. Many drinks and laughs later it was time to call it a night once again.

Friday and Saturday came and we dove our skinny butts off yet again. I was going to make sure and use every chance I could to dive. I mean, hey we were given the tanks to use, might as well use them. Besides, there was no way I was going to be left sitting on the boat and hear someone surface saying, “you will never believe what I saw” and I wasn’t there myself to see it. Even the bad weather that was forecasted for the beginning of the week held off until the end.

Friday night we had an awards ceremony where we got our certification awards and then people received there “Pirate Spirit Award” for each of the four boats. I was picked for my boat and ecstatic to receive our dive flag as my award. I also received my HSA Advanced Scuba certificate with all the dives I racked up over the week.

Saturday morning we had to say our goodbyes and hopped a plane back to Grand Cayman with a long layover. Enough time to go to a sea turtle farm and pet the turtles before we got on our next plane back to Houston and then home.

At the end of the week we all pooled our money together to tip the dive masters and the restaurant staff. Omar and the rest of the fantastic wait-staff was working the whole week totally voluntary, even the transport drivers that drove us back and forth from the hotel to the resort all hours of the day. A true testament to what good people are really capable of.

This was the 5th year of the Dive Pirates diving at Cayman Brac and the 3rd year staying at the Brac Reef Beach Resort. This trip was absolutely amazing and I cannot wait to go back and see the resort rebuilt with even more accessible rooms than before. I cannot say enough about how well this trip went and how good everyone was in organizing and putting this event on.

If you are interested in taking this amazing trip with the Dive Pirates just give there site a click, but do it soon, because their slots fill up quickly.